It seems that I am spending some time learning Drupal so the content of this post may defer from the editorial line a bit but as usual, I hope it may help someone.

The current drupal installation I am working with has CCK and Popups: Add and Reference (let’s call it PAR for future (shorter) references) modules. Unfortunately, by default the links added by PAR are in a new div tag below the input fields which increase the length of the form quite a bit as you can see below.

What I am proposing here is a way to put the PAR links inline with the input field. I am quite a beginner with Drupal so the method may not be really clean or fail proof and your comments about any easier way of doing it are welcomed. The result looks like the screenshot below.

Still working with Drupal and still learning a lot… The challenge I was facing was to let users upload files to a specific folder but to restrict access to that file so that it cannot be downloaded by anybody simply by giving the file path (private download). Therefore, users are allowed to post content but not access it (otherwise nothing prevent them to access files from other users in the folders).

Fortunately - as often with Drupal - there are already solutions on the web:

To summarize, I mixed the two solutions given here above, because I had a problem when using only solution 1 (my drupal site is not at the root of the website but in a subfolder). Therefore I used method 2 and edited the .htaccess file at the root of the website in order to add the following line somewhere in the block delimited by <IfModule mod_rewrite.c>...</IfModule>:

It is no secret, it is easy to share a firefox profile. I am running a dual boot Linux / Windows and was therefore interested to share my Firefox profile between the two. But in the process, I actually became interested to be able to access that profile from my work computer. After all, there are already extensions to store bookmarks remotely so why not do the same with the complete profile.

This is the reason why I decided to create a new profile on my Dropbox. That way, the profile is stored remotely and synchronized in real-time between my work computer and my personal computer (both Linux and Windows).

Creating a new profile can be done in two ways. The first is by using the graphical interface and the second is by modifying the profiles.ini file directly. I will present both.

In my previous post, I detailed how I partitioned the drive of the X200 in order to install Linux. I will now give a few words about the installation process of Linux Mint 7. The focus of this post is set on how to keep your boot loader as it is and allow a dual boot Windows/Linux from the Windows boot loader.

There are only a few things that I changed from the default installation. The first one concerns the partitioning. Since the drive is already partitioned, it is necessary to tell the installer which partitions to use for what. From the picture below, you can easily see which partitions are used and where they are mounted.

I wanted to install Linux on my computer (Lenovo X200) but I was a bit afraid to mess with the partition table due to the fact that there is a hidden Restore & Recovery partition available at boot up when one press on the ThinkVantage button.

I did want to keep Windows available as there are a few programs that can come handy and I didn’t want to mess with the default behavior of the computer (understand that the ThinkVantage button should still work, that windows should still be accessible and that I can basically still use the laptop the way I used to do :-)).

I will explain in the following paragraphs how to reformat the drive using open source tools and how I created the new partitions for the X200.

Using the method described in my previous article, you can easily see the benefit to bypass censorship. By using the set up previously described, you can encrypt all your traffic through the proxy and therefore appear as if you are only having one long SSH connection.

But in addition, it can be a good idea to configure Firefox to use the proxy to resolve the DNS requests (in case the DNS server you are using are “filtered”). To do so, type “about:config” in the adress bar and change the setting of network.proxy.socks_remote_dns from false to true as shown below.

If you enjoy Pandora or any content that is restricted to the USA, it is quite annoying when you cannot access it because you are out of the country (Ha! Good old Europe).

Fortunately, proxies can help you fix the problem quite easily. I used to employ GPass. It is an easy solution to use under Windows but last time I tried to start it, it couldn’t find any tunnel. There is however an alternative solution to put in place if you have a web host in the USA with SSH connection: create your own proxy tunnel.

The process is simple:

While looking for an easy (and immediate) way to get an SSH console to windows, I found MobaXVT. It is describe as a “Free portable X server with Unix/Cygwin utilities”. As the description suggest, it is actually a Cygwin encapsulation into a nice multi-tab interface that has a built-in (among other things that I didn’t test) SSH client. Anyway, if you are just looking to have an SSH client under Windows, this is a great solution if you are allergic to the Cygwin installation. This is available for free download at http://mobaxvt.mobatek.net/en/. 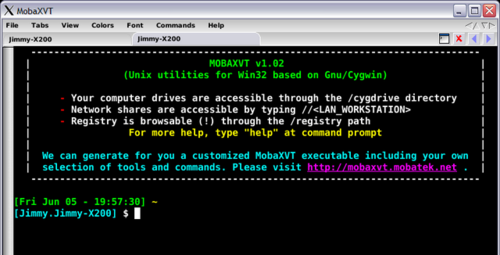 Following the article where I explain how to install a SSH server on the Lacie Edmini, I will explain how to allow authentication through the use of private / public key so that you can use the method explained in another article to backup your files on your local server.

During the installation of the SSH server, we didn’t touch anything in the SSH configuration files. The result was that you could login with the root user you created during the process. The first thing I want to do is to allow a normal user to use ssh. Doing so is easy. Just open the /etc/passwd file and modify the line with the user you want to allow so that it finishes by /bin/bash or /bin/sh depending on the shell you prefer. Finally, a user allowed to connect with ssh will have a line look like:

In a previous post, I explained how to make automatic backup on a server using SSH. I was suggesting that the server was somewhere on the Internet so we didn’t have to deal with any SSH installation. However, sometimes some data are to sensible to be stocked somewhere on the Internet so a good idea is to have your own little server running SSH. In addition, once data are backed up on your local server you can decide (automatically) which one of them can be send on a distant server.

I have a Lacie Edmini V2 (ethernet gigabit disk). It is a nice little network hard drive coming with a Linux OS. It already has a HTTP and FTP server but unfortunately, no SSH or rsync. Therefore, before being able to use the backup scripts we have to install these two services. Fortunately for us, some good work has already be done by some people. But unfortunately, I’m not as good with Linux as these guys are so everything they said was not always really clear. That is mainly the reason why I will try to create a guide that will be a little bit more explicit. I still assume however that you have some basic Linux knowledge.